Over the past month Australians have been subject to an intensive media campaign directed against the People’s Republic of China (PRC) and its apparent military designs on Taiwan, also known as the Republic of China (ROC). Though we can find evidence of Beijing’s intention to bring its neighbour under its control, the aggressive tone taken in response by Canberra and Washington DC has given many the impression that war is imminent. Biden’s break with official policy earlier this month in guaranteeing that the US will intervene militarily if the PRC attacks Taiwan has heightened tensions in the region, and though the White House has since retracted this statement, it is a dangerous indication that a confrontation between the US and the PRC is well within the realm of reason. It would appear for all intents and purposes that the baton has been passed from radical Islam to China as the US continues to search for enemies to fuel its permanent war economy.

The decision to form the AUKUS partnership with eight nuclear-powered submarines to be manned by the Australian navy has decisively placed Australia in the US camp after years of “pretending that Australia ‘doesn’t have to choose between its history and its geography’”1. As the Melbourne Anarchist Communist Group notes, this partnership is designed to “undermine China’s Belt and Road Initiative, which is a project by the Chinese so-called ‘Communist’ Party to take China’s development to the next level and reorient the economy of the region around it.”2 AUKUS is just the latest stage in what has been a considerable US-led military buildup in the region. Last year the US military concentrated its Pacific submarine fleet, as well as the carriers Ronald Reagan and Nimitz accompanied by destroyers and cruisers, to the South China Sea, carried out exercises with B-1B supersonic bombers and rehearsed ‘forcible entry jumps’ in Guam with paratroopers of the 25th Infantry Division.3 Despite the change of administration in the White House, Secretary of State Antony Blinken reaffirmed in July this year the US’ “July 13, 2020 policy regarding maritime claims in the South China Sea”4, indicating that Biden shares Trump’s commitment to exacerbating the already fragile situation. AUKUS signals a deepening of military ties between the three states, with Australia already negotiating with the US to purchase Tomahawk cruise missiles and other ordnance, and the UK in discussions with Australia to establish bases here for its own fleet of nuclear-powered submarines.5

This has been accompanied by an intense media campaign that appears to be geared at presenting a conflict between China and Taiwan as inevitable. We can find numerous examples of deliberate misinformation in the world’s press concerning the situation. Reuters, to take one, reported on October 1 that dozens of People’s Liberation Army Air Force (PLAAF) aircraft had entered into Taiwan’s south-west ‘air defence zone’6, a term that appears purely in its own reporting. Examining the report from the Taiwanese Ministry of Defence, however, we learn that there were ‘air activities’ over its Air Defence Identification Zone (AZIZ), which puts a different spin on things7. Taiwan’s AZIZ was in fact established by the US shortly after the Second World War and covers more of the Chinese mainland than Taiwan itself, meaning that any aerial activity within Taiwan’s south-west AZIZ is taking place over either the PRC or the open ocean. When we consider the fact that neither the ROC or PRC recognise one another, it could in fact be argued that the PLAAF is being quite respectful of the ROC’s airspace. 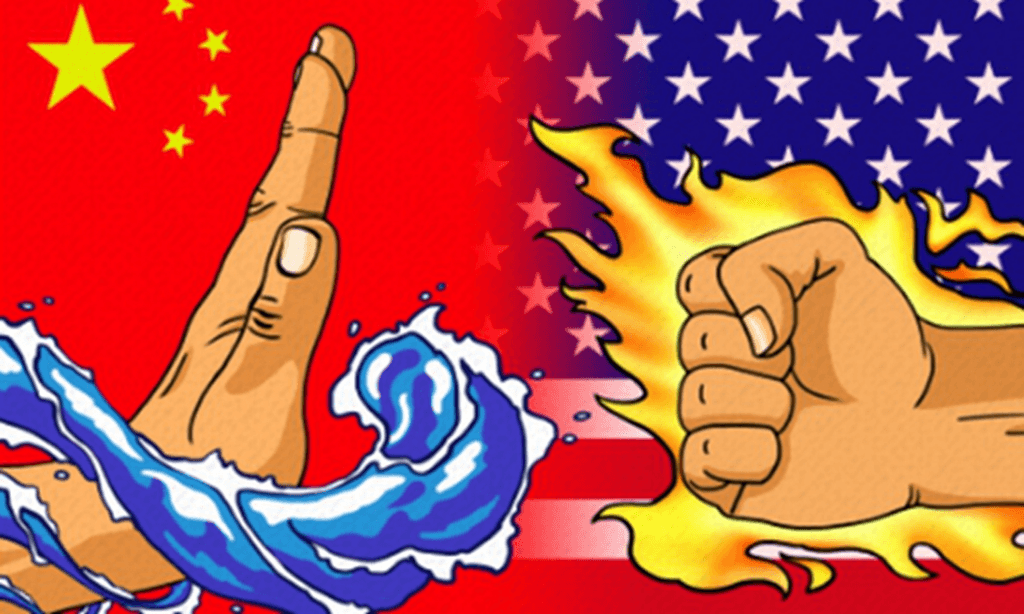 There is, however, a grain of truth in this reporting. With the significant increase in incursions made by the PLAAF into the AZIZ over the past year, Taiwan’s airborne response now costs upwards of US$1.9 billion, or 9% of its defence budget.  This means that the PRC does appear to be deliberately exploiting this Cold War remnant to keep Taiwan’s military spending high at a relatively low cost to itself8. So while we can observe provocative and alarmist headlines in the west that feed into the overall drive towards war, we do find that Beijing is attempting to manoeuvre in a way that can easily deflect criticism while carrying out a quiet war of attrition. Beijing has demonstrated its commitment to establishing its military hegemony in the Pacific with its recent orbital hypersonic missile tests. The PRC is soon set to exceed Russia’s nuclear superiority over the US. We must avoid absolving the PRC of any sin when it comes to military provocations in the region.

So why is the PRC so fixated on Taiwan? The jingoistic Preamble of the Constitution of the PRC claims that “Taiwan is part of the sacred territory of the People’s Republic of China. It is the sacred duty of all the Chinese people, including our fellow Chinese in Taiwan, to achieve the great reunification of the motherland.”9 The ROC originally covered much of mainland China until its defeat in 1949 by the communists, at which point its government shifted to Taipei and established the current rump state. For most of its existence the ROC existed under the dictatorship of the nationalist Kuomintang party, eventually transitioning to a western-style liberal democracy in the 1990s. The PRC and ROC have never recognised one another, with both claiming to be the legitimate government of China. Beyond these historical grievances, Taiwan is significant strategically, geographically and politically, being a part of a series of islands which reach down to Singapore that the PRC seeks control over in order to expand its reach into the Pacific.

For the people of Taiwan itself, unification could only mean the imposition of the same repressive political system that has in recent years seen the bloody decimation of Hong Kong’s aspirations for greater autonomy. It is not our belief that the US and its allies are interested in the plight of the Taiwanese people, however, but mainland control over Taiwan would still be a disaster for western states. Taiwan as part of the PRC would act as China’s launch-pad into the Pacific, allowing Beijing to further its strategic reach and maintain a more assertive stance. A key goal of AUKUS is therefore to make any military move by China to seize Taiwan, or any of its other claims in the South China Sea, more complex. In this analysis, we believe that neither Beijing or Washington DC are in fact desiring an armed conflict with one another at this stage, especially one that could escalate into a global and potentially nuclear confrontation. We are convinced, however, that though the US may not necessarily want this, the nature of its permanent state of crisis may drive it to initiate a conflict out of necessity. Its declining military and economic hegemony is likely to prompt it into a military confrontation with the PRC in an effort to preserve its status as the dominant superpower. History has furthermore demonstrated that when enough military assets from rival states are poured into a small enough area, the potential for some sort of mishap that could spiral into a military exchange rises exponentially. It is nothing short of a miracle that any of us are still here following the Cuban Missile Crisis for example.

We know our demands. We don’t want AUKUS, we don’t want nuclear-powered subs, we don’t want American and British bases, we don’t want missiles and we don’t want a war with China. We want the US out of Asia and the PRC to leave Taiwan alone. Of course, in a world governed by the logic of capitalist expansion, inter-imperialist rivalry and the existence of states, these calls are unlikely to be heard unless they are backed up by the overwhelming force of the global working class itself, using the tools at its disposal to actively deprive the warmongers of their ability to wage war and to drive the capitalists and statists into the sea. Anarchist Communists Meanjin stands with the Melbourne Anarchist Communist Group in stating that we “are opposed to all governments worldwide, but our task is to overthrow the capitalist class here in Australia. Our aim is for a workers’ revolution which sweeps the world, toppling all ruling classes without distinction.”10