As we enter 2022, the world still seems to be falling apart. A new wave in the global pandemic has seen Covid numbers soar despite high rates of vaccination in the imperialist nations. Environmental collapse continues unabated, the same old systemic racism, the threat of war with China. No wonder more people are turning to radical politics.

Always opposed to capitalism and the state, anarchist politics have been growing in popularity during a new global progressive wave. However, they still remain the minority within the minority that is the far left. Just what are our black-clad bomb throwers, crusty bin punks and stale old syndicalists up to these days? Well, they're pretty busy globally. But we're going to focus on Oceania.

Jura is now the oldest surviving anarchist collective in Oz, clocking in at 44 years old. A co-operative bookshop based in Petersham, Sydney, the name is a reference to the historic co-operative anarchist watch makers of the Jura region in Switzerland. They host gigs, films, meetings and all the rest, but most importantly they have a pretty impressive catalogue of books on anarchism, social movements and radical history. They have some pretty cool old posters hanging around too.

Unfortunately, builders next door knocked a hole in the wall around mid-2021. This rendered the building unsafe, and combining this with Covid health concerns Jura seems to remain temporarily shut, however it should reopen next month.

IRL, described as an ‘infoshop’ was previously based in Footscray, Melbourne. It's now moved to The Substation in Newport, a government arts hub, and is now considered a library, a reading room and a publishing press. They host a bunch of stuff like poetry readings and drawing classes, and publish similar works + focus on centering the voices of marginalised communities. It's worth noting that Incendium doesn't explicitly identify as an anarchist space, however it is explicitly anti-capitalist. We'll leave it on the list for now.

The Melbourne Anarchist Club was a long-standing social space in Melbourne, playing the basic equivalent of Jura in Sydney. In 2015 the MAC became involved in a battle with developers who wanted to push them out of the space. This resulted in an acrimonious split in 2019. MAC technically still exists, with one group maintaining the legal rights. They seem to be hunting for a new location in North West Melbourne.

Nestled away in the suburb of Newtown (not as trendy as the Sydney Newtown), Freedom Shop sells ​​Anarchist Books, Zines, Pamphlets, T-Shirts, Patches, Buttons. The irregular magazine, Aotearoa Anarchist Review “Aargh!” also appears to be published out of the Freedom shop.

Also based in Te Whanganui-A-Tara/Wellington, Rebel Press publishes books related to anarchism, anti-colonialism, and generally anything to do with the radical left. Radical Press is based upstairs in the Wellington Trades Hall.

The biggest uptick in Australian anarchism is the growth of 'specific' (or Especifist, or Platformist, or Dual Organisationalist, depending on your flavour) anarchist groups. For some reason, they’ve mostly adopted wildlife themed football-club-style logos. We’re not sure what's behind this trend, but let's check out the teams in the Australian Anarchist Communist (Football) League. 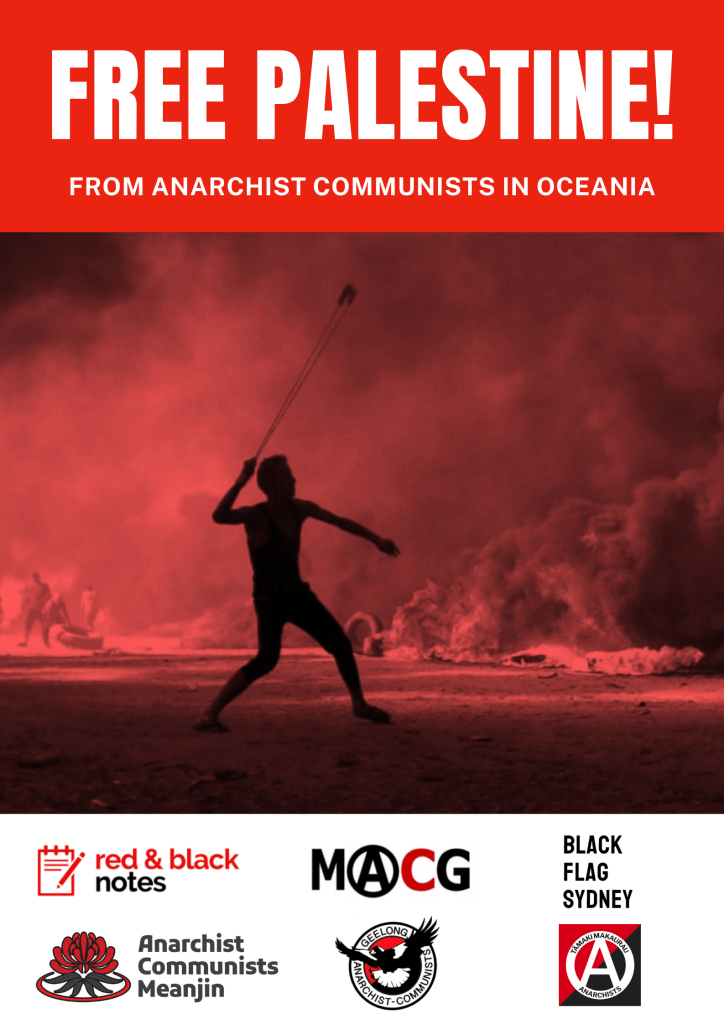 The small but serious MAC-G (not to be confused with the Melbourne Anarchist Club) is the most senior, having existed since the 2000's. MACG maintains the consistent publishing of a letterhead, The Anvil. For a long time they were the only organisation with this level of consistent publishing. Thankfully, other anarchists around Australia have also managed to pull their fingers out. MAC-G produces leaflet and is active in social movements in Melbourne & it's members respective unions. MAC-G is affiliated with Anarkismo, a website that publishes views from anarchist groups primarily of the ‘Platformist’ tendency.

Although their facebook page still exists, Collective Action has become rather, er, inactive. But at least it was a collective decision. Formerly known as Anarchist Affinity, the second Platformist group in Melbourne has folded. Will a resurrection be on the cards? Maybe a new group will emerge in 2022? Who knows. But it seems the People's Republic of Victoria isn't the capital of radical politics anymore.

Officially launched on the 5th of January, 2021, ACM emerged from the anarchist tendency inside the broad-left Brisbane organisation Unite. Another Platformist/Especifist organisation, ACM runs introductory political classes out of Common House, and is active in unions + social movements north of the wall. They're particularly key to the South East Queensland Union of Renters (SEQUR), and the Brisbane section of Campaign Against Racism and Fascism.

They also publish a monthly bulletin, Notes From Below.

Arggghh mateys! The pirate-themed but ‘very serious’ Platformists of Black Flag formed out of the Sydney Anarchist Communist reading groups. BFS was officially founded on the 10th of January, 2021, making BFS the ever-so-slightly younger sister organisation of ACM. Black Flag produce their own news sheet, aptly named Mutiny. Surprisingly the name is not a reference to the older Mutiny Zine. They published some cracking articles in 2021. Including ruffling a few feathers with a solid critique of Mutual Aid.

Towards the end of 2021, a BFS member was elected to the board of Mardi Gras on a dissident ticket aptly named Pride in Protest.

BFS, alongside Jura and the Sydney chapter of the IWW organised an anarchist conference for 2021, but with the lockdown it had to be cancelled. Will Anarchism 2022 will be the libertarian answer to Marxism 2022?

The newest kid on the Ancom block, GAC launched on the 1st of May, 2021. They host a monthly feminist reading group and are pretty active in the local labour movement, including a rather unique industrial campaign at Geelong Library.

GAC and BFS members were featured on Living the Dream podcast in late 2021, talking about the state of anarchism in OZ and an article on anarchism and the United Front.

They might be in Aotearoa, but we still think our trans-tasman cousins are neat. TMA have been around for a few years now and play a key role in maintaining anarchism across the ditch. This includes both a camping event and the "Really, Really Free Market." This year TMA have been heavily involved in campaigns supporting gender self-identification. TMA also produces the Anarcats podcast.

The "M" in AWSM might stand for movement, but they’re actually just a group. The other ancom group in Aotearoa, they have however been around longer than TMA. Judging by their social media, they like to put up stickers and write the occasional article. They are also an affiliate of Anarkismo.

Given the number of Anarchist-Communist Groups in Oceania, is a federation on the cards? Will there be more teams added to the league next season? Who knows, but it's a positive sign that the existing groups collaborated on a some campaigns and released a collective statement (link below) regarding the occupation of Palestine earlier this year. There was also a pamphlet full of practical information for opposing the anti-health, anti-vax, right-wing "Freedom" rallies (link also below).

Graphic for the Sydney Anarchist Conference, which was cancelled due to Covid.

Everyones favourite slacker, the infamous Nazi hunter and giant Collingwood fan, @ndy. Slacky keeps a really neat blog tracking the far-right in Australia, plus interesting tidbits related to anarchism. There's even a rather amusing take on his character in the TV show Romper Stomper, based on conspiracies amongst the far-right as to who the elusive Slackbastard just might be. Does this make Andy the most (in)famous anarchist in Australia?

Andy also runs a podcast with Cam Smith. Yeah nah pasaran! covers all sorts of boneheads and talks to people who think about how to deal with them

Formed in 2020, at the initiative of a number of Sydney anarchist (communists), the group with Australia’s most unfortunate acronym (SAC) started getting people together for weekly reading groups on various topics. This continued through most of 2021 as a fortnightly  reading group. The discussions are used as the basis for articles, which are then compiled into a bulletin/journal. These are hosted on Red & Black Notes where you can access the articles individually and download the formatted journal.

R&B Notes hosts the writing of a number of anarchist-communists in Australia (including the Sydney Anarcho-Communist Bulletin). The site also has a pretty cool reading list for those looking to get their heads around anarchist theory, and an excellent archive of historical content from Australia’s anarchist movement.

Beyond the Dark Horizon – A Green Anarchist Zine

We're not sure what we can see Beyond the Dark Horizon, but apparently its a ‘publication of green anarchist art, poetry, stories, rants from ‘so called-Australia’ and beyond.’ Who'd have thought. 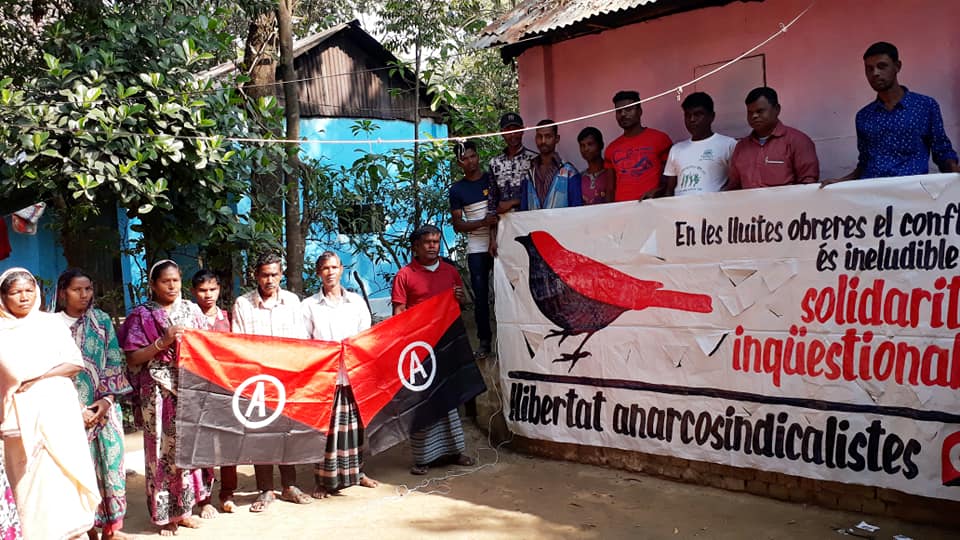 The Bangladeshi affiliate to the IWA organises amongst workers in Tea Plantations.

Are they anarchists? Or are they a union? They’re both! Founded by Spanish and Bulgarian exiles, the ASF has existed for quite a long time. Today they're largely involved in helping spread anarcho-syndicalism throughout South East Asia. Bangladesh seems to be the most rapidly growing section, organising amongst workers in Tea Plantations. In Australia affiliates (i.e. branches) are currently listed as Melbourne, Canberra, North West Tasmania, Perth and Sydney.

Industrial Workers of the World (IWW)

The other competitor for the are-we-a-union-or-a-political-organisation is the Wobblies. Not exactly anarchist, given their more hierarchical and centralised structures, the IWW has nonetheless seen (and continues to see) substantial anarchist involvement. Members in Melbourne have been the driving force behind establishing the Renters and Housing Union (RAHU). IWW branches in Sydney are currently listed as Melbourne, Sydney and Adelaide.

Seemingly just one guy who identifies with anarcho-syndicalism but can’t get along with anyone else, Rebel Worker still produces a broadsheet, “Sparks.” The name would appear to be a reference to a rank and file journal in the Tram Workers Union established by the ASF in the 90’s.  The original Sparks actually enjoyed very substantial popularity amongst the workers. The modern Sparks does not.

Below are a list of websites that host information related to the history of the anarchist movement in Australia and Aotearoa.