April and May saw a variety of events as part of the social movements, including climate activism, trans rights, and first nations land rights to name a few. A small sample of these battles are described below.

Weekly rallies have been held outside the Department of Home Affairs in Brisbane in an effort to end the disgusting policies currently enforced by the Government. The Refugee Action Collective Queensland (RAC) have been organising regular protests at 12pm-1pm on Wednesdays which include a number of demands to ensure humane treatment of refugees. One of these demands includes ensuring the refugees who have recently been released from onshore detention centres be given adequate support when released, as currently they are unable to access government assistance and often live in abject poverty. They also demand that offshore detention be eliminated entirely, and for refugees to instead be given safety within Australia and a clear pathway to citizenship, as well as preventing deportations of refugees to places they would be endangered.

A rally was held in Toowong to campaign against the developer Bluebird, who are attempting to demolish several low-cost apartments to erect fewer, higher-cost apartments in its place, which will also destroy a local community garden. Many of the protesters were members of the Growing Forward community garden, which was created at the beginning of the covid-19 pandemic in response to food scarcity in the community, a problem which has only been exacerbated over time thanks to both the pandemic and climate change-induced extreme weather. The protesters wish to prevent the developers from destroying the garden they have worked hard to create, but this is far from the only problem Bluebird presents. Growing Forward sees this development as another step in the gentrification of West End, which itself is a symptom of capitalist greed, pushing the working class ever further from the city by making housing more and more unaffordable. While Bluebird claims their development will be "sustainable" and "carbon neutral", this 'green' capitalism is cold comfort to the working class who will be forced to leave their homes and have their community garden destroyed.

A rally held by a variety of groups, both religious and secular, aimed to protest the ongoing despicable treatment of refugees in Australia and in offshore detention centres. Speakers emphasised the need to release those held indefinitely in detention centres, some of whom have been trapped there for years, with no understanding of when (or if) they will be released. However, even when refugees are released from confinement, they are then given no support, and are forced onto visas which prevent them receiving any welfare payments. This treatment is disgusting and inhumane, and only produces ever increasing human suffering for people who need help. This is made all the more disgusting when Australian military action is often one of the causes of instability and war in the countries these refugees are fleeing from in the first place. The Government seems to have plenty of money to spend on new weapons, including submarines that will never even be delivered, but can't find enough money to ensure the basic human rights and needs of the refugees those weapons create are met.

Extinction Rebellion's rally against Santos and their destruction of the environment occurred on Wednesday morning, and saw groups of average people going out to the Santos offices to leave flood-damaged personal items as a tribute to the damage caused by climate change. Santos in particular was targeted because of their huge profit gains from exacerbating climate change, which is allowed to continue due to their 'generous' donations to the Government. The flood damaged items being used in particular are from the recent floods which devastated large parts of Queensland and New South Wales, and is only one demonstration of the extreme weather which will continue if climate change goes unabated.

Led by a coalition of the UQ Environmental Collective, Extinction Rebellion and Stop Adani, the most recent climate change rally was held in King George Square. This rally focused on the problems of fossil fuel companies and capitalists monetizing the destruction of the planet, most notably with the devastating effects of recent flooding still being felt by most of the region. The rally continued the tradition of fighting climate change worldwide, as the weather and the climate become more unpredictable and demonstrate the increasing need for swift action on climate change. This was one of many rallies held by these groups, with the need for climate action becoming more and more necessary.

After the success of protesters in having detained Medevac refugees freed, Refugee Solidarity Meanjin has continued their efforts to push for further wins against the government in a broader national day of action. The movement has been successful in ensuring that refugees are finally freed from detention centres here, but many more still remain in offshore detention and poverty after release continues to be a far too common occurrence. The demonstration aimed at making it clear that there is still much to be done to assist in the treatment of refugees.

International workers day, also known as labour day or may day, is a celebration of the union movements worldwide, including huge wins that affect all workers to this day such as the 8-hour day, the weekend, and the minimum wage. May Day celebrations occurred across the world on the first of May, with the Labour Day public holiday falling on the Monday after this in Queensland. Huge crowds marched through the streets holding their union banners and flags, and many marched towards a wider celebration. In Brisbane approximately 10,000 unionists marched through the city towards the show grounds where live music, carnival rides, and free food and drinks were provided. Workers of the world, unite!

A sit-in occurred at Peter Dutton's office at Strathpine led by School Strike for Climate, where a group of both students and members of the public attended to hold signs at passers-by, give speeches, and write letters to the MP. Attendees were primarily concerned with the current lack of a climate change policy by the Liberal party, who have no substantive plan to tackle climate change. Unfortunately most of the rally's energy was pushing for electoralism to create change (with one of the impromptu speakers being the local member for the Greens), however, there was some push for direct action amongst the crowd.

A rally was held by the Sri Lankan community in Brisbane Square in protest of the current Sri Lankan Government's corruption and violence. Current President Gotabaya Rajapaksa's corruption has led to a huge economic downturn for the country, with severe shortages of food, medication, and fuel leading to huge queues for these basic essentials. The Government is stacked with his close family members and he has been accused of extensive money laundering (including in Australia through real estate healthcare contracts). Protests throughout Sri Lanka demanding he step down resulted in harsh repression when police opened fire, killing one and injuring many more. The community demands human rights for Sri Lankans, the stepping down of Rajapaksa, and tougher laws in Australia against money laundering.

A solidarity speak out was held in Brisbane Square by Equal Love in response to the recent leaked document from the supreme court of the United States suggesting they will overturn Roe vs Wade, the ruling which made abortion legal in 1973. Although this ruling only directly affects the United States, this is a win for the Christian far-right worldwide, and must be opposed even for those of us outside of the USA. Such a ruling is emboldening for the far-right across the world, including in Australia. Only two weeks before this rally (on the 30th of April) Amanda Stoker, a Liberal MP and current federal assistant minister for women, held a pro-birth (also known as pro-'life') rally in Brisbane. This ruling also shines a light on the current situation within the country. Abortion in Queensland, although legal since 2018, is also not currently accessible to all women, with the high costs often exceeding the budget of working class women, and access even more difficult (if not impossible) to attain for rural women. This is a reminder that rights within a capitalist framework are never guaranteed, and must continue to be fought for, as long as it takes. 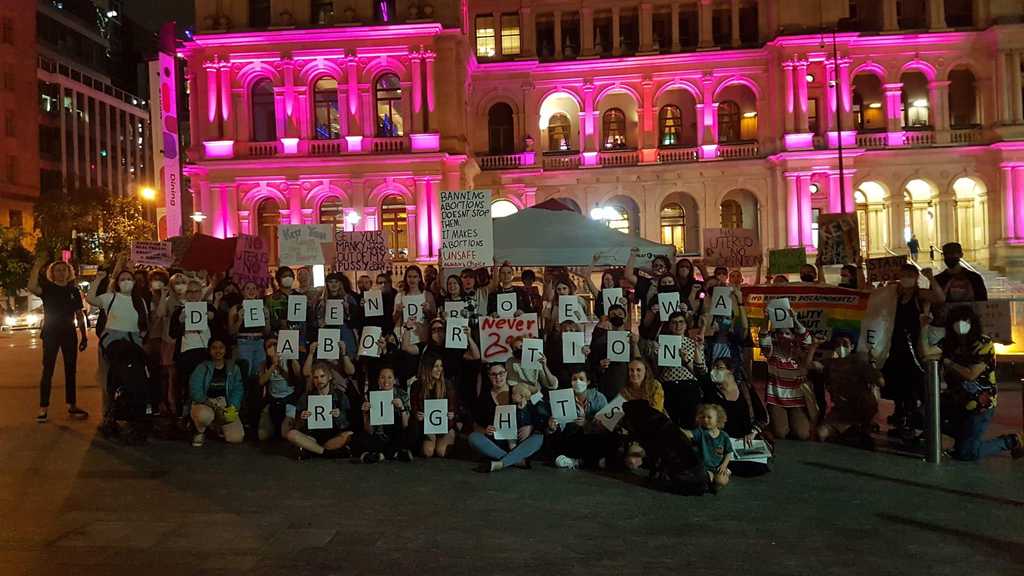 At the 74th anniversary of the Palestianian expulsion from their land in 1948, a rally was held in Brisbane in solidarity with the ongoing and violence occupation of Palestine by Israel. Nakba, also known as the Palestinian Catastrophe, was an event declaring 78% of British-occupied Mandatory Palesitne as Israel, leading to the destruction of hundreds of Palestian villages, and the forced explusion of approximately 700,000 Palestinens from their homes. While the anniversary is an important day of remembrance, it is also essential to remember that this violence and colonisation has still not ended. Just two days before the anniversary, journalist Shireen Abu Akleh was shot and killed while others were injured covering the occupation for Al Jazeera in the West Bank. It is essential to acknowledge and protest these brutal and disgusting events worldwide in solidarity with Palestinians.

Equal Love Brisbane held a protest in King George Square to counter transphobic comments made by a variety of Liberal party members, including Tasmanian Senator Claire Chandler's transphobic "save women's sports" bill which was supported by former Prime Minister Scott Morrison. The bill aimed to discriminate against transgender women in women's sports under the guise of protecting women. Liberal party candidate, Katherine Deves, is another prominent transphobe within the party, who believes half of all trans women are sex offenders, called all trans children "surgically mutilated and sterilised", and said being anti-trans is equivalent to being members of the French Resistance. While transphobia permeates large swathes of the liberal party, Labor has shown no clarity on ways to protect LGBT+ staff and students from discrimination in school.

The Australian Conservation Foundation and 350.org Australia held a rally outside the Brisbane Convention & Exhibition Centre to oppose the Australian Petroleum Production and Exploration Association (APPEA) Conference occurring within the centre. The conference included figures such as then Prime Minister Scott Morrison and a huge array of different oil and gas companies, all of whom are directly responsible for continuing climate change. These corporations are those who have and continue to give huge donations to political parties, and who directly benefit from the destruction of the planet. The rally occurred outside as a way to disrupt the conference as much as possible, to demonstrate the opposition of the general public to these companies and the politicians who support them.

Another rally directed against the APPEA Conference was held on Wednesday, with this rally being held in direct response to energy company Santos and their continued attempts to encroach on Gamiliaraay land. Also held outside the Brisbane convention & exhibition centre, this was both to disrupt the conference and to shine a light on the continued attempts of Santos to drill 850 coal seam gas wells in a 1000 hectare area in the Pilliga forest. This would be hugely detrimental to both the residents in the area, and the environment in general, with potential to increase flooding in the area due to deforestation, a risk to the water basin for local residents, and contribute more generally to climate change. The continued efforts of Santos to do this, against the wishes of the Gomeroi people, also directly harms the ability of the Gomeroi people to demonstrate sovereignty over their own land.

That is a sampling of the many events which encompass the local social movements.The number of events slowed towards the end of the month, likely partly due to the federal election. Next month these will be continued with further articles on the continuing struggles within the social movements.