This month saw a slower start that still contained a number of important events within the social movement. Below are samples that demonstrate the ongoing power of these social movements.

In response to the planned eviction of David, a disability pensioner and member of the South East Queensland Union of Renters (SEQUR), approximately 90 people gathered to defend his home on Friday the 17th of June while he attended the Supreme Court of Queensland in order to attempt to overturn the eviction. The warrant to evict David from public housing would have resulted in him becoming homeless and was only signed at all because the department of housing insisted David had a messy yard.

Members held speeches, stood in the yard and some locked themselves to doors in order to ensure the home was secure in case police acted. By midday David had a document from the Supreme Court ensuring the police would not enact the eviction until that Monday at 3pm.

Monday the 20th of June saw protestors return in numbers to once again prevent the eviction, with the Supreme Court this time allowing the current warrant to expire and for David to return to QCAT. The collective strength of the protestors forced the police to back down, demonstrating the might of organised renter's power. 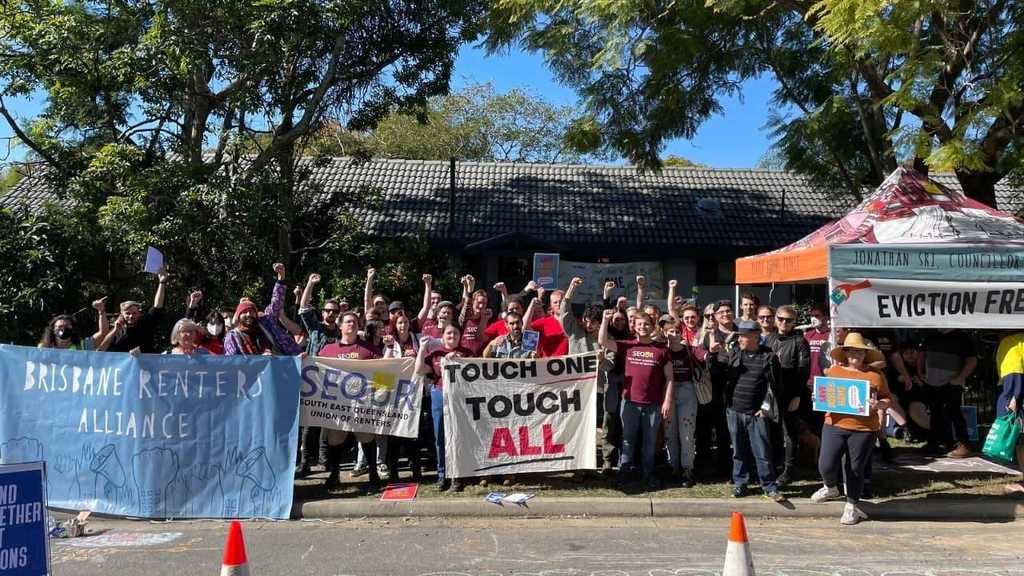 An action was organised by the Greens to prevent two seperate constructions against the will of the community in the inner suburbs of Brisbane. In West End, the erection of two towers over Davies Park that is beyond neighbourhood height limits is continuing to be proposed by developers, despite the protest by the local community.

Meanwhile in Highgate Hill, the city council has approved the demolition of 14 affordable apartments to be replaced with seven luxury apartments, which in the middle of a rental crisis is especially unconscionable. The protesters take issue with not only the developers and the council involved here, but also companies which supply the necessary equipment for the work, like concrete firm Hanson Australia. To show clearly that everyone involved will be affected by protesters, they marched from Davies Park itself to Hanson to block their driveway to show the anger of the local community.

Whilst planning for continued blockades in Sydney next month, members of blockade Australia who were camping in bushland 80km from Sydney were targeted by police in a strange and potentially illegal raid on the property. Members saw unknown men in camouflage on the property, who when confronted ran and jumped into an unmarked car with two others to flee.

None of these men were marked as police and refused to identify themselves when asked, so activists attempted to prevent them leaving by blocking the way of the car (some even jumping onto the bonnet). The police alleged they "feared for their lives" due to these protesters, apparently leading to them finally identifying themselves as police officers.

After this, the area was raided by approximately 100 police, including a helicopter and the dog squad, with seven blockaders arrested and many possessions damaged or confiscated. Most of these charges are from the attempt to stop the police.Given the bizarre behaviour of police in this situation, however, their lawyer will challenge this in court, especially as some are facing up to 10 years in prison, mostly thanks to new laws in NSW regarding protesting which many human rights groups have condemned as draconian.

Another raid occurred on the 24th of June, resulting in two more arrests. Despite the repressive attempts by the State to prevent necessary protest against the destructive fossil fuel industry, Blockade Australia will continue attempting to prevent further environmental destruction through direct action.

A rally was held by Equal Love Brisbane in King George Square to continue the defence of LGBTQ+ rights in Australia. Such a rally is essential to demonstrate support for the LGBTQ+ community, but especially trans women given the increased fear-mongering among conservatives.. The rally is especially topical given the recent decision to exclude trans women from international swimming by the International Swimming Federation (FINA).

This also comes just days after a Sydney school, St Catherines, has announced that they will only hire a new principal who is willing to sign a statement declaring marriage is only between one man and one woman. The LGBTQ+ community is constantly under attack from the right, meaning it is of the utmost importance to be able to fight back against them.

Following its takeover of Kabul in 2021, the Taliban was able to renew its campaign of abuse against human rights from a position of state authority, including stripping citizens of basic human rights including (but not limited to) the right to life, equality under the law, education, livelihood, speech, and free and fair elections. Throughout the country war crimes, ethnic cleansing, media censorship, and exclusion of women from daily life, which have been commonplace since the Talbans formation, has led to the death and displacement of an unknown number of people.

To speak out against this, members of the Tajik community in Brisbane called for the classification of atrocities in the regions of Panjshir, Andarah and Khost to be considered genocide, the immediate attention of the UN towards these atrocities and investigation of these atrocities by the Internation Criminal Court. These demands were raised in a protest held in King George Square in Brisbane to show solidarity and support.